"Let Me Tell You "Bout By Be-est Freind" 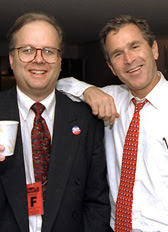 ...at being a great leader...statesperson...

From the (ultra-liberal...not) Financial Times

Clinton must step aside today to win tomorrow
By Stephen
Graubard
Published: February 20 2008 18:58 Last updated: February 20 2008
18:58
The time has come for Hillary Clinton to make a historic announcement,
certain to dismay her friends and confound her enemies, demonstrating her
undeniable strengths – intelligence, ambition and resolve. Following on her massive
Wisconsin primary defeat, she ought to surprise the nation and the world by
announcing her decision not to contest Texas, Ohio or Pennsylvania, accepting
Barack Obama as the Democratic presidential nominee in opposition to John
McCain.
Though she has been intermittently hostile in her comments on Mr
Obama, it should be possible for her to say that she will do whatever she can to
prevent a Republican victory in November. She needs to represent her withdrawal
not as a personal sacrifice, but as a refusal to play the Republican game that
could lead to a McCain victory and the elevation of justices to the US Supreme
Court hostile to her most cherished values. The time has come to say that
Republican rule, as exemplified by the Bush administration and McCain pledges,
offer prospects too dangerous to contemplate.

I could not agree more.

My guy Edwards had the grace to step aside when he KNEW it was over.

Hillary Clinton KNOWS it's over. Bill Clinton knows it too. They are smart, driven, caring, patriotic and motivated people. They know the right thing to do...get the Democrat elected to the White House...get firm majorities in the Senate and House, and fix this mess we're in.

A moment in history...a chance at a "Profile in Courage".

An opportunity to cement a legacy.

So the McCain campaign "allows" NYT to print the lobbyist story!

Cool!! Now the right-wing spin machine gets into full dudgeon....smearing here and blasting there (it's what they do best, ya know...) and all the Klownservatives and sym-pathetic independents come running to St. John's side.

Stop with the negative campaign...

...actually it's too late. The Clintons have completely misread the political landscape and wrecked Hillary's chances for the nomination.

NOW they're going to scorch the earth behind them?